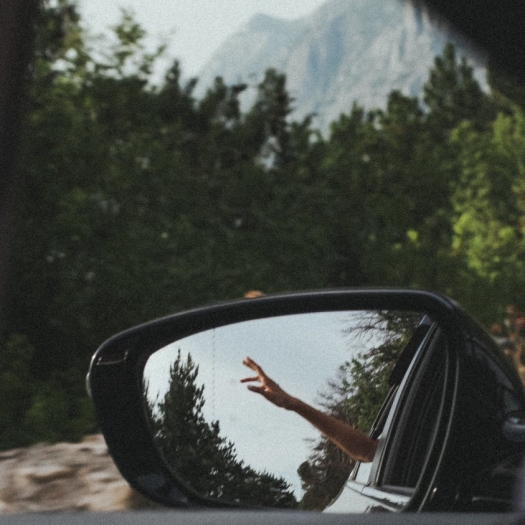 We may have full awareness that there are no do-overs in life. Until that magical time machine is invented, there is no going back and doing things differently in hopes of producing an alternate outcome.

We may as well choose the latter view because here we are! But what is your experience? Are you enjoying the ride?

If I had access to that magical time machine, I would recreate an entirely different experience than the one that our family had the day we got lost in the Sierra Nevada mountains.

About six years ago, we were visiting my husband’s parents in Vegas and had rented a car to drive to Martinez, CA to spend a few days with his sister. Just after we entered California, we stopped for gas and I went inside to buy a state map.

The GPS by the way was an app on a cell phone. About twenty minutes later, the voice navigation told us to turn right off of the highway down a two-lane road.

“Really?” my husband King asked as he turned anyway.

I checked the paper map in my lap. “Looks like a shortcut.”

Several miles down this winding road, passing people on horseback and kids toting rafts and other water toys, we stopped to stretch and eat some of the food that we had packed for the road trip. We were deep in a valley by a very pretty stream with the tallest trees surrounding it. We took off our shoes, waded into the water, and admired the smooth stones beneath our bare feet. Our son was five years old and appreciated trying to skip some rocks.

Suddenly we heard an unfamiliar sound like super high wind and the ground started to vibrate. In that split second, I can still recall locking eyes with King and I think both of our faces said what happening and should we run? A flash of a jet passed over our heads and the sonic boom followed. So unexpected and absolutely wild!

Still somewhat shaking from that craziness, we piled back in the rental car and proceeded onward to find the highway that the map indicated was about fifteen miles away.

As the road started to narrow and signs of civilization rapidly disappeared, we lost cell signal. I was feeling a bit smug about my instinct to grab that paper map just a couple of hours earlier.

But King was annoyed.

I checked the map. Sherman Pass had a note “closed in winter” by a road that looked like a stretched out Slinky and didn’t connect to anything else. I felt even more certain that having this backup map was invaluable because I couldn’t imagine an app telling me this.

“Negative. We have to keep going. Maybe there’ll be a place to turn around.”

Except there wasn’t a place to turn around. We were committed to climbing those mountains. There was a near vertical stretch of landscape on our left and a sheer drop off on the right. No guard rails. That freaked me out, so I tried to keep my eyes forward.

We didn’t see another car. Not in front of us. Not behind us. Not one car passed on the other side. Not one.

I started to imagine what would happen if the car broke down. We had no way to contact anyone. How long would it take for another vehicle to come through? Would they find our bodies and shake their heads at the stupidity of tourists?

The expletives were flowing. Damn GPS! Then it became my fault too. So much stress! It was awful.

When we finally started a descent, I began to realize that we were in the middle of something so beautiful. The forest was thick and amazing. Untouched. Pure. Wonderful. The sun was shining, the sky was blue and cloudless. We saw deer and wildflowers and birds soaring overhead. I realized that I was missing something so very extraordinary by bickering with my husband.

He was livid about the entire circumstance and just couldn’t wait to get back to a highway. He didn’t coast down the mountain we were on. No, it felt more like a roller coaster. There were so many winding curves and we took them all fast.

Now at this point, I’m starting to get even more frustrated because I’ve just realized we have a genuine experience going on here. Slow down, dammit! Enjoy the ride.

Just as we reached the highway, King looked in the rear view mirror and with a worried tone asked, “You okay, buddy?”

Instinct kicked in again and without even looking, I quickly dumped the contents of the plastic bag from our gas stop and whirled around with it just in time to catch the vomit. We pulled the car over on the shoulder (there was finally a shoulder!), stepped out…and laughed. What a messy little adventure that was!

Really, the only thing I would do over about those moments in time would be to realize sooner what an amazing trip we were taking. I may have taken a few photos since that’s all the phone was good for during that ninety minute detour. I’ll have to settle for my memories, and that’s okay.

It serves as an excellent reminder that the best laid plans don’t always unfold the way that you think they should. There will be detours and unplanned adventures during your travels in this life. How will you face them?

Will you struggle, swear, argue, and pitch a fit of frustration? Or will you embrace it with curiosity and wonder, appreciating what is while finding your way back to that main road?

Everything that happens in your life happens the way that it’s supposed to. Sometimes it feels messy and out of your control. Sometimes you’ll even need to grab the barf bag.

The best thing you can do in the moments of the unexpected is to enjoy the ride.

“There is a difference between knowing the path and walking the path.” – Morpheus

Would you like to be coached on this or another area of your life? Book a free consultation with me here.

3 Replies to “Enjoy the Ride”

IDK, y'all. It hasn't rained here since early June. So unless I slept through something overnight...this was a sweet little surprise this morning.
In order to allow the good stuff to come in, you have to release what no longer serves you.
Notes to self:
I heard the strangest statement on my social travels over the weekend. Could have been an IG post, could have been a podcast. I don't even recall...the source wasn't that relevant in the moment, yet I can't forget what was said.
It's the time of year to bring the braids back!