On this Father’s Day, I want to speak to all of those who hold the feeling of ‘Dad status: it’s complicated.’

You see, I used to include myself in that group. That is, until I really learned how to step outside of my emotional brain and the seemingly endless stories of loss, sorrow, and abandonment that I’d been playing for myself on repeat over many years and realize that I can rewrite it all. I have the power to do just that.

Let’s start with Dad. Although he was not my first dad, he was the one I spent the most years with – 23 to be exact. Not a great amount in the span of a lifetime, yet the experience was significant.

I was 4 years-old when he married my mother. I was 10 years-old when he legally adopted me. I was the same age that my son is now, but I knew that I wanted to have the same last name as everyone else in our family. By then, I had two younger sisters and was sick of being called out as the “half-sister” by various babysitters. Even at that age, I knew I wasn’t half of any damn thing and really didn’t understand why it had to be part of introductions. Never from my immediately family, but frequently within the small rural community in Eastern Kentucky. They were well meaning, comments – simply statements of fact by the people who made them. Yet I didn’t understand why they felt it necessary to differentiate.

Now this adoption was exactly what I wanted to happen, though it would prove to present complications later in life when emotions would converge with dry legal processes and I would make up new stories in my head. More on that another time. First, let me tell you about Dad.

He never treated me any differently from his biological daughters, simply introducing me as his eldest which made me feel like a whole person, rather than half.  He always called me out on my bullshit even when I didn’t know I was dishing it out. A classic example of this was during a phone conversation I was having with a friend around fifth grade.

I was curled up in a chair in our living room, chatting it up with a girlfriend. Right out in the open. That’s what we did way back in the day before cordless and cell phones. You had your conversation wherever the phone was located and that was that. If you were lucky, you had a long cord that might stretch to another room with a door. I wasn’t that lucky that day.

“NO, my dad doesn’t know what the middle finger means,” I told her in my most animated valley girl voice – in an ‘as if’ tone with the accompanying eye roll. My smug little undeveloped brain thought that our generation had invented this secret gesture and the adults around us were clueless. That would include Dad, who was walking right by me as I said it. He was a few steps up the staircase when he whirled around, flipped me off, and said, “fuck you!”

I was appalled. He had just proven me to be a complete idiot and thankfully, my friend didn’t see that, though she likely heard it. I felt my face flush red hot and told her quickly that I needed to go [and bury my face in a pillow in my room with utter humiliation]. Dad didn’t say another word. He simply walked on, laughing and shaking his head.

Dad died in 1999 when I was 27. I spent many a Father’s Day after that missing him, mourning my loss, and feeling empty instead of relishing the time that we had together as I do now. It has certainly taken me many years to realize that there are healthier approaches to loss than the choices I have made in the past. Instead of being angry at the injustice of no longer having him to talk to on a daily basis, I choose to focus on the happy (and downright funny) memories that I am honored to have.

As a teenager, I decided to differentiate between my two dads by calling my birth father Daddy. I even told him this was my preferred approach so that he knew I wasn’t referring to him if I talked about Dad. I’m not sure why I chose this other than perhaps a subconscious realization that I was but a toddler when my parents split up. Small children like to use the mommy and daddy vernacular as it’s typically what they are taught.

When Mom and Dad split, I was 14 and went to live with my paternal grandparents in Colorado for a time while things were being settled by the adults involved like where to live long term after losing everything in divorce.

On Valentine’s Day, a beautiful arrangement of fresh flowers was delivered to my grandparents’ home. I was speaking with Daddy on the phone (I believe he was still living in PA then) and told him how ticked I was that Dad had sent me flowers on Valentine’s Day. He and I had discussed this, after all. Dad owned a florist in our small town and the year prior had a half dozen roses delivered to me. At school. Now, this was a day when all of the girls were getting flowers from their boyfriends and here I was getting flowers from my DAD. I was so embarrassed, I asked him to ‘never do that to me again’.

Daddy listened patiently to my rant and when I paused, he asked me to read the card aloud to him. I obliged, “Happy Valentine’s Day, dear daughter. Love, Daddy.”

I had read that card three times, but it took me having to read it aloud to the true sender for the realization to hit me that I was once again an absolute idiot. I apologized profusely and did my best to back pedal, assuring him that it was quite okay that he had sent the flowers since I had never forbidden him of such a gesture. He laughed it off, but I sure did feel guilty over my reaction on both occasions for years afterward.

I feel much closer to Daddy in adulthood. We’ve both evolved quite a bit and I find that I can relate to him on levels that I never thought I would. One such example is simply the words that are used in our PC culture surrounding death. A few years back, he posted a very simple statement on Facebook that resonated with me.

“Why are so many people passing away these days? It used to be they just died.”

That set off some healthy discussion that I absolutely agreed with. If there’s one thing that I can’t get on board with, it’s the “passed away” term, or even worse, “passed”. Passed what exactly [as one friend responded]? I get how it may seem ‘softer’ to some to use this phrase, but I don’t equate death with passing anything. It’s death. I prefer to call it what it is. It’s part of the cycle of life. It’s inevitable. It rarely seems timely or fair or just. Yet it still happens.

I definitely inherited the same logic as my birth father.

And now, My King. We are currently on year 18 of marriage which quite honestly, doesn’t seem possible. And to my newer friends, yes that is his given name, not just an exaltation I have bestowed upon him (though I certainly could, and I probably should). He has witnessed me working through my Dad and Daddy drama and plenty of other issues over the course of our years together. Through it all, he remains my best friend, top supporter, and quite frankly, checks all the boxes of the virtual manual I have in my head about what a father should be.

He is here every single day for our son, and I don’t mean just the physicality of being present, but honestly listening, engaging, playing, interacting, disciplining, and horsing around. Before we were married, I told King about all of the places I wanted to see, starting with the Grand Canyon, because I had always had a fascination with the west. He said we would see it together and just a few months later, we did.

King is game for just about anything, especially new experiences. The only thing he draws the line on are thrill rides and so I have found myself on many a questionable piece of local fair or amusement park equipment with the boy. Thankfully, he’s almost big enough to do that stuff on his own because I’m just about over it myself.

He has taken on the role of travel agent, booking flights and hotels wherever we are going, while leaving all of the activities up me. On our most recent trip, he really had to suck it up and try snuba, natural water slides, body rafting, and night kayaking in the ocean. While he told me that he was finished with water sports and river rock for quite some time, I know that he secretly enjoyed himself as much as he enjoyed the boundless enthusiasm of our high energy, thrill seeking son. King goes with the flow. 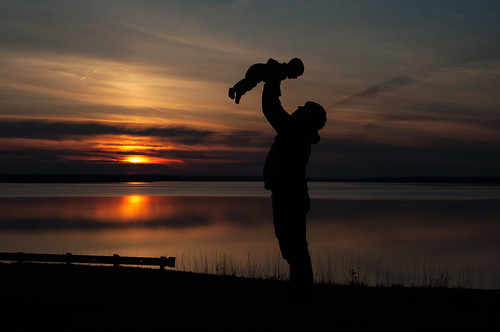 All of us are just doing the best that we can on any given day. We have our shortcomings. We are fallible. Sometimes we do and say stupid shit. Sometimes we suck. Sometimes we wallow for far too long in our pain because it’s become a place of comfort. It’s what we’ve come to know how to do well. Sometimes we show up as our best self and sometimes we are downright intolerable.

If we’re very fortunate, or if we choose to see it, we have people in our lives who overlook our shortcomings and love us anyway.

Sometimes our relationships become complicated, but they don’t have to remain that way. Ultimately, our experiences are exactly what they were supposed to be. When you both learn and accept this, your perspective can shift in a very powerful way.

“Everything that happens, happens as it should, and if you observe carefully, you will find this to be so.” – Marcus Aurelius